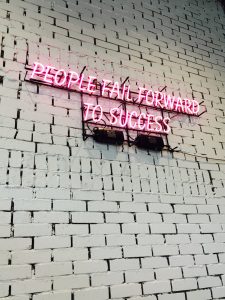 The ROI of Failure: A Decade of

Over ten years ago the business unit I worked in at Bell Canada, one of Canada’s largest enterprises, was shut down. My father had spent his entire 30+ year career there. I lasted just three years.

I began my job search in earnest. Having lived through the turmoil of the dotcom period, I had plenty of job searching experience. At least now, I had a brand name on my resume that still existed. I hoped it would prove helpful.

While I was putting energy into looking for a job, in the back of my mind, I wanted more autonomy or control over my destiny. I saw too many people affected by the sometimes unwise or misguided decisions of others just by being in the wrong place at the wrong time.

During my MBA, someone said something that resonated with me. They said that they wanted to earn a living for how they thought. It was especially meaningful to me because I had tried to gain employment with a number of large consultancies, but I did not fit their profile. If they were not interested in my experience then how could I achieve my goal? As many will agree, our success is not so much driven by us, but by the help, we get from others along the way.

Thankfully, a friend of mine, who was a well-established management consultant, was working on a project that required more resources, and he gave me my start. That first contract was all the validation I needed, and I was able to parlay it into subsequent projects.

Another valuable connection I made and nurtured, surprisingly and unexpectedly, led to my first international client and a research project that laid the groundwork for Volterra’s focus on social media. What a ride it has been, given how the digital landscape has changed over the last decade.

One of the most significant pieces of advice I ever received, from another valuable connection, was to remain in the orbit of a local university. Following that advice led to a critical project and the beginning of my teaching career. Teaching opportunities continued to present themselves because of others and their willingness to help me.

Teaching has proven to be one of my greatest pleasures and one of my most rewarding experiences. The relationships and opportunities that have resulted from instruction have been invaluable too. Also, it’s a cliche but so right in my case that I learn just as much or more from my students as I teach them.

While my teaching has flourished, growing Volterra has been my primary focus. Volterra, which began as a where I would sell a project and then deliver it, has now evolved into a company with a core team providing social media management and strategy services to a diverse list of small and large organizations.

Part of Volterra’s evolution stems from the growing need of many organizations to outsource their social media efforts. Early on, our client engagements involved conducting a social media audit and using the results to inform our strategic recommendations. Too often the organization would not act on our recommendations or only partially. When pressed about whether they would like Volterra to support them or go so far as to manage their social media for them, the answer increasingly was “yes.”

Over the years, the roster of clients has grown, clients for our outsourced social media management services and clients for special projects such as social audits, competitive analysis, social media monitoring. We have had wins and losses. We have shared our expertise, enabling some clients to build their internal capabilities and take on the management of their social media. We have taken our losses and used what we have learned to do better and be better. We still have a long way to go.

Like any other business, we have faced numerous challenges. We have made multiple mistakes too. Costly ones, and not just monetary. We have had fruitful business relationships and some not so much but the most valuable relationships have been amongst the team of interns, freelancers, and suppliers with whom we have worked. Their loyalty and support, especially during challenging times, will not be forgotten.

The people we meet, the experiences we have, and the challenges we face all serve to make us who we are and provide us with wisdom, whether we asked for it or not. I would not be where I am, and Volterra would not be what it is if not for making mistakes, letting the scars serve as reminders of what was learned, and persisting, no matter what obstacles presented themselves.

There are still more people to meet, challenges to face, mistakes to make, and wisdom to gain. Some people talk about taking twenty years to become an overnight success. It’s ten years in and who knows what the next ten years will present. Social media is over a decade old but who can say what the digital landscape will look like in another decade? Here’s to the journey!

Photo by Ian Kim on Unsplash

Ready To Make a Real Change? Let's Build this Thing Together!